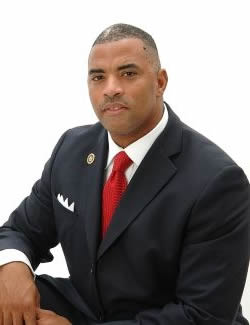 NABSE President, Dr. Michael D. McFarland is an outstanding, energetic, and dynamic leader with a proven track record of transforming educational organizations into high-performing institutions. Dr. McFarland is the current superintendent of the Crowley Independent School District, where he serves more than 15,000 students across 23 campuses.

Prior to providing leadership in Crowley, Dr. McFarland was the superintendent of the Lancaster Independent School District from 2010 to 2017. He led the district from a historically underperforming status to a nationally recognized, award-winning school district. Under his leadership, the district and school board received national recognition as the 2018 HEB Excellence in Education winner, the 2017 Urban School Board Excellence winner, the School Board of the Year winner from National Alliance of Black School Educators, and the Texas Outstanding School Board winner from the Texas Association of School Administrators. Persistent achievement gaps closed and student performance consistently improved under his leadership.

Prior to becoming a superintendent, Dr. McFarland worked in Champaign, Illinois where he served as Assistant Superintendent of Achievement for Champaign Unit 4 Public Schools. While serving in Champaign, he led the development of a high school restructuring model that was adopted by the Illinois Board of Education as a model for transformation of low-performing secondary schools throughout the state. Dr. McFarland also was instrumental in the development and implementation of a collaborative multiagency partnership with the City of Champaign, Park District, and Unit 4 Schools called “Operation Hope in Garden Hills.” This multiagency project included the “Lighted Schoolhouse” and was recognized nationally as a model approach for addressing school and community issues.

Prior to serving in Illinois, Dr. McFarland served as principal of John Tyler High School in Tyler, Texas. When McFarland arrived at John Tyler, the school was low performing, academically unacceptable, and plagued with many challenges. Under Dr. McFarland’s leadership, the school transformed into a high-performing high school that was recognized by the College Board with the 2006 National Inspiration Award. This award was only received by three schools in the nation and was given due to the increase in student performance and college and career readiness as measured by SAT and college acceptance. More than 92% of the students who graduated from John Tyler High under Dr. McFarland’s leadership received letters of acceptance to a college, university, and/or the military.

Before serving as John Tyler’s principal, Dr. McFarland was principal at Foster Middle School in Longview, Texas. During his tenure as principal there, he was selected as the “Best Principal in East Texas” by the Longview News Journal.

Dr. McFarland is an educator who is committed to creating opportunities for success by removing barriers, aligning systems, implementing programs, instituting best practices and building the capacity of people to ensure higher levels of learning for all students.

Dr. McFarland has been recognized at the state and national level for his outstanding leadership as a school superintendent. He was selected as the American Association of School Administrators National Superintendent of the Year from Texas in 2015, and he was honored as the National Alliance for Black School Educators Superintendent of the Year in 2014. Dr. McFarland began his career in Tyler ISD as an algebra, accounting, and computer science teacher.

Dr. McFarland is married to Cynthia McFarland and has two daughters, Kharis and Michiah, and two sons, Tyler and Jarrett.